New year’s Day in Scotland is the continuation of Hogmanay celebrations from the night before. See our write-up on Hogmanay for more about this amazing celebration.

In Ireland, New Year’s Day (Lá Caille or Lá Bliana Nua) is generally a quiet time, but still recognized a holiday. It was declared a church holiday by the Holidays (Employees) Act of 1961. In 1973 it became a public holiday, first observed in 1974.

Some villages, towns and cities hold New Year’s parades. Dublin’s parade includes marching bands, musicians and other groups filling the city streets as a moving party. Small town parades may be themed after local events, anniversaries in the coming year, or be of a religious nature.

However, mostly people spend the day with friends and family. There is a beautiful tradition of walking the hills or along the seashore to mark the start of the New Year. Many coast towns organize “New Year’s Dips” —  short swims in the icy waters of the Irish Sea or the Atlantic. These events are often held as charity fundraisers. For the record, we do have custromers who have gone swimming and even scuba-diving in our Casual Kilt!

Twelfth Night is celebrated by several branches of Christianity. It marks the end of the Twelve Days of Christmas and the coming of the Epiphany. Since medieval times, it has been an occasion for celebrations, especially in areas, or at times, when merry-making on or around the holy Christmas day was discouraged.

In the UK, Twelfth Night is still celebrated in some communities and households, but has been overshadowed by modern Christmas and New Year’s festivities. The centerpiece of the party is the Twelfth Night Cake which contains special tokens — a bean, a coin or a cast-metal image of the baby Jesus (like a King Cake). Whoever gets the figurine is named “King or Queen of Twelfth Night”.

Twelfth Night is also the occasion for wassailing and Wassail – the holiday punch made of ale, brandy, spices, honey and other ingredients. Wassail is carried in a large bowl from household to household to be shared with song. Often Morris dancers and musicians lead the processions and parties. “Wassail” comes from the Old English “Waes hael” meaning “be well”. This is a great excuse to kilt up (with warm accessories) and go visiting your fiends — make some wassail or just bring a few bottles of stout!

Epiphany (which means “manifestation” or “showing forth”) is one of the oldest Christian feasts and has been celebrated since the end of the second century (even predating most Christmas observances). Also known as Three Kings’ Day in the United States, this day marks the three wise men’s visit to the baby Jesus and his baptism. The United States (US) Virgin Islands observes the day as a public holiday with parades, bands, food and music. Across many Christian communities in the US, people will mark the day (or the nearest Sunday) with “Star processionals”, treasure hunts to find a figure of the Christ child, and various parties for church-goers. Of course, Epiphany also marks the beginning of Mardi Gras season in Louisiana — the time to make King Cakes.

This day centers around public education regarding ongoing issues of inequality, and on the benefits of being more involved on one’s own community. Many schools have lessons that focus on civil rights topics while churches, civic groups, clubs and communities organize “Service days”. The idea being to bring people together to work towards improving their local community. This could mean setting up a community garden, assisting at a homeless shelter, collecting donations for charity, and many other great activities. A good day for a work-hardy Casual Kilt or Semi-trad.

As Celtic people, we certainly know about the strength of community and the importance of supporting one another. We also have a deep respect for freedom and an understanding of persecution (invasions…the Clearances…the potato famine…you get the idea).

Today, don the kilt, hold your head up, and harness your inner William Wallace. Go out and fight the good fight. Inspire others by your strong example.

If going out and doing community service is not your thing for January 16, you could theoretically do…nothing.

This joke holiday was started by newspaper columnist Harold Pullman Coffin in 1973. The aim was to provide people “with a day where they can just sit without celebrating, observing, or honoring anything.”

It seems Coffin was a bit of a curmudgeon. He probably also celebrated ‘Festivus’. It occurs to us here at USA Kilts that a Celtic interpretation of the day would be to go Regimental / Commando in your kilt — a bold statement in January!  But after all, “Nothing” should separate you from celebrating your heritage. This way, you can also still go out to honor Civil Rights Day – just be careful if it’s windy at the community garden!

This day was created in 1998 by Kathy Chamberlin of Hopkinton, NH. and Debby Hoffman, of Concord, NH. The theory is to go out and be nice to folks. The stated challenge is to give at least five compliments to five different people you encounter.

As kilted men, we are all used to getting compliments. Just imagine the impact you’ll have when you saunter up to someone and tell them you really like what they are doing! As we see it, this is also a great excuse to support your fellow kilt wearers. Take some time to encourage the new guy who just got his first kilt and is still getting used to it! Or, you know, get him a shirt.

Ahhh…Burns Night. This is perhaps the greatest celebration of what it is to be Scottish. To learn about this amazing holiday and how you can host your own Burns Supper, Click Here.

As we’ve mentioned in the past, Hogmanay and other celtic celebrations usually involve fire. But no festival does it quite like Up Helly Aa. This intense fire festival is native to the Shetland Islands– the biggest and oldest edition being held in the town of Lerwick.

The name is derived from the Scots word up which indicates something being at an end. This is derived from Old Norse word uppi (still used in Faroese and Icelandic). Helly refers to a holy day or festival and comes from the Old Norse helgr for holiday or festival. Aa seems to represent a’, meaning “all”. So the festival means “The ending of the holiday for all”, or “all of the holidays.”

Originally Up Helly Aa was celebrated around January 5 – Twelfth Night. It may have been a localized version of the fire festivals associated with Hogmanay. However, city fathers in Lerwick moved the festival to the end of January to try to seperate it from other revelry and dampen it down a bit. It didn’t work.

The modern holiday has its roots in an older Yuletide tradition of “tar barrelling”. As a final big blowout for the Yule/Christmas holiday, groups of young men (fishermen, dockworkers, sailors etc.) would drag barrels of burning tar through town on sledges. These “squads” often rammed the burning sledges into each other. The earliest documentation of this organized mayhem goes back to the Napoleonic Wars.

Tar barreling was banned around 1874–1880. Permission was eventually obtained for torch processions. The first took place in 1876 at the end of Christmas. The first Up Helly Aa Day torch celebration took place in 1881. The following year, in honor of a visit by Alfred, Duke of Edinburgh, another torch-lit procession was held — this time even more organized and grand. The holiday has been an institution ever since.

The core of the festival is a procession of up to a thousand or more guizers (people in costume and sometimes masks) organized into squads, bearing torches. Honoring the Norse ancestry of the region (but not taking it too seriously either), the main costume theme is always “Viking”. The procession is organized and led by the “Jarl” (a Norse word for chieftain). He or she is the chairman of the Up Helly Aa planning committee and has final say on the theme and style of the main squad costume. Other groups will also form squads, each with their own costume.

The procession culminates in the torches being thrown into a replica Viking longship called the Galley. The first galley was introduced in 1889. Once, the galley was a real fishing boat which had outlived its usefulness. Nowadays, the craft is an elaborate float made each year by a team of carpenters, boat builders and artists.

After the ship is burned, the squads retire to local “halls” — schools, sports facilities and hotels — for  semi-private parties. Each squad will perform a skit, which may be a send-up of a popular TV show or movie, a satire on local events, or simply song and dance.

Up Helly Aa events are held all over Shetland including Scalloway, Lerwick, Nesting and Girlsta, Uyeasound, Northmavine, Bressay, Cullivoe, Norwick, the South Mainland and Delting. And…perhaps in your neighborhood? 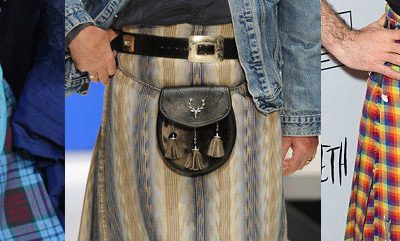 Hollywood Kilts – The Good the Bad and the Ugly

Your Celtic Wedding – Part 2 – The Quaich